When I was a young girl, I loved playing with dolls. And I always knew that I wanted to be a mother. And I wanted to be the best mother in the world. And the best wife, too.

So, when I finally found out I was pregnant the first time, I was thrilled! My poor young husband still wasn’t sure he wanted a family, and a baby…he had never really been near any babies in his life. He had lived on a farm and been a serious student in school and college, then a serious worker at his job. This was really new for him, and he didn’t know what to think of it. His reaction? “I want a son to carry on our family name.” So very engineer personality and German of him, which is what he was. So, my purpose was to give him a son.

I was going to go from being a working girl to a stay-at-home mother. I knew that I wanted to focus on my family for a few years, then slowly inch my way back into the business world. I loved my work too, and didn’t want to give it all up, as it was an important part of who I was. But, I was ready at the age of 26 to become a mom. 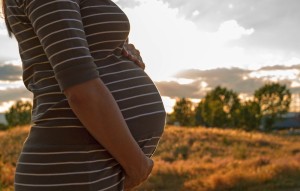 For those of you gals who have been through this, you know that no two pregnancies are alike, even if we are talking about one mother who has several pregnancies. It is always different. So, I didn’t know what to expect. And it turned out to be a bit challenging with my first one.

I had always had stomach problems, finding out many years later that I had an almost non-existent upper valve in my stomach which allowed my stomach contents to move up into my throat too easily. And when you have a growing belly that is pushing upwards on your stomach, it just exacerbates the whole thing. So, I was throwing up a lot. But through it all, my health stayed pretty good.

I went to the hospital three times, when I thought the moment had arrived. First time, it was what they called ‘false labor’, my belly practicing as it were. Second time, I had contractions but no other progress. Then the contractions stopped and they sent me home to wait.

So, we were almost two weeks beyond my ‘due date’ when I began getting symptoms again. So, I decided to wait it out patiently. I did some pear canning (we had a pear tree in our back yard.) Then, I told my husband I wanted to do a round of miniature golf to take my mind off the contractions, which were about 7-8 minutes apart, but getting stronger. (The first one usually takes a lot longer, because our body has been ‘tight’ for all of this time, making it a challenge for that baby to get out.)

So, we went to play miniature golf. I stopped from time to time to wait out a contraction, leaning over and panting. People looked at me strangely, but I didn’t care. When we had finished 18 holes, I had the best score of my life, with 3 holes in one. I had been very focused.

Then, it was time to go to the hospital, and off we went. Little did I know that it would be more difficult than imagined, and that I would die for a little while.

It had been hours of labor, and we were making very slow progress. I was exhausted, and I figured the baby would be too. Turned out the baby was a posterior presentation, chin first, with his head laying on his spine, making it almost impossible to get him out without turning him and using those nasty head clamps to pull him out. They didn’t use any sensors in those days to monitor the baby, and they had no idea if he was all right.

It took a total of three doctors in the delivery room to get his head turned so that they could clamp around his head and pull him out. And he was still…nothing.

I overheard the doctors talking among themselves, “I think we have lost this one. It’s a boy, and he is not responsive. What do you think we should do next?” They turned from me and worked on the baby to get him breathing. It wasn’t working.

All I could think of in my totally exhausted state was, “It took too long, I killed my own baby, and it was a boy. And that I let my husband down, and he will never forgive me.” So…I just let go…

I was feeling light, and floating above the delivery table, and I could see the three doctors working on the baby, and the nurse standing by my side, watching them. She wasn’t paying as much attention to me, as she was concerned about the baby. So, I drifted away… 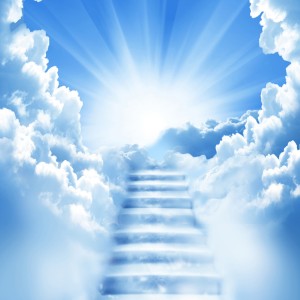 I remember feeling light as a feather, just floating around, and it looked like I was up in the clouds. But I couldn’t see my body, but I could feel how light I was. I could hear the most beautiful music I have ever heard, but I wasn’t really hearing it, I was feeling it. Weird…but I kept going.

I could feel that there were people who cared about me nearby, but I couldn’t see them nor hear them, but I felt them. I sensed my grandmother that I never knew, and others that had passed away but were there…nearby…somewhere.

And then, I saw two hands stretched out ahead of me, palms open, as if reaching for me, welcoming me. I began to see a shape, and what I perceived to be a man’s face with a beard and very long hair…wearing a white robe. And I knew who it was…

This was not my first time here. When I was around 3 years old, I drowned. My older brother pulled me out of the water by my hair and my mother worked over me doing CPR. I watched from above, thinking to myself, “Look, my mother is kissing a little girl, and she looks just like me.” I didn’t go quite as far that time, but I did float into the white clouds and sense love all around me, before my mother succeeded in making me breathe again. I coughed up all kinds of yucky water, but could breathe a little better each time I did. But I was sick for a week or so, probably a touch of pneumonia. All the while, talking in my head to my new invisible friend, who looked just like me. But, I digress…

So, there I was (or a part of me), floating in the whiteness, and I couldn’t wait to get to him and grasp those outstretched hands. But, then I heard a baby cry. And I stopped.

Was that my baby? And I heard it again, and I knew that it was my baby. But it wasn’t up here with me, it was back down there, where my body was still lying there waiting for someone to notice I had died.

I was torn. I loved it here, feeling so light, so happy, so loved totally and completely. I had never felt this happy nor loved. But, how could I leave my baby? He kept crying, weakly but a little stronger each time. I couldn’t stay, I had to go back…

The clouds enveloped the man in the white robe and I couldn’t see him anymore. I was dropping, leaving this wonderful place. But, I had a baby waiting for me. It was all right after all, my baby lived. And now it was my turn to live again…

I opened my eyes, and looked up into eight sets of eyes, all worried. Two nurses now, and two of the doctors, as one of the doctors was still watching over my son. And I smiled, and saw their relief. The nurse who had attended me said, “Wow, you had us really scared! You were not breathing for so long…five or six minutes I think. But, you’re back, and you need to see your son.” 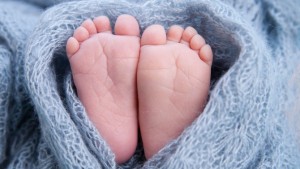 Yes, I did. So, they brought him over, and I held him. He was perfect, almost pink (he was still having a little trouble breathing), and he looked up at me and we stared at each other. Oh, how beautiful he is! He looked deep into my eyes as if saying “Welcome back,” and I looked at him and said out loud, “Welcome, little one.”

Marilyn Dayton
Previous ArticleWHO IS THE MOST QUALIFIED PERSON IN THE ROOM?
Next Article BEING A MOTHER, LEARNING THE “POWER OF ALLOW”