In my last blog, I mentioned that my mother and I had some problems. At the end of her life, we talked about it, as we got to know one another as people, hashing through our differences, talking through old issues, and actually becoming what you might call friends. All those years we lost being angry…

My mother doted on my older brother. Everyone loved my brother, he was such a warm, loving boy, and he happened to be a “mother’s boy”. He admitted that even back then. This mother-son mutual admiration society only had 2 members. I was not invited.

There used to be a TV show called “The Smothers Brothers”, with Dick and Tom. Dick used to say “Mom loved you best,” which of course Tom would deny. I relate. Even at the end of her life, my mother admitted that she had a special strong love for my brother. She also admitted that she didn’t ‘like me’ as much as she wanted to, and she couldn’t figure out why. As we talked about it, the story came out.

You see, my father had cheated on my mother. It was after my brother was born, my mother had some problems, and the doctor told her that she had VD, given to her by my father from one of his paramours. She had suspected that he had a girlfriend or two (he sometimes was drunk and would disappear for days at a time), but this was proof…it made it real. She also was told that if she wanted another child, she had to have one ‘now’…as she would soon be needing surgery to remove her ‘infected parts’. So, she felt many emotions…anger and rage, fear, even some self-loathing because she couldn’t ‘keep her man at home’. She just wanted to enjoy being a new mother, and here she was being forced to have another baby, or live with just one. So, she swallowed her pride and got pregnant…and that was me. 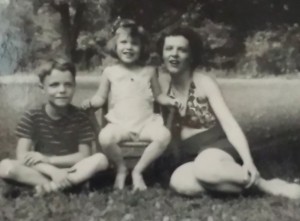 At the end, she told me she needed to give more love to her first-born because she initially felt that he was cheated somehow out of having her full attention. What she forgot was that, as the second born, while she was giving her son so much love, I was “just there”. And those were her exact words when we talked about it at the end of her life. She put on a maternal face when needed for me, but it just seemed that I had become a ‘hand full’. And she didn’t know how to handle me, so she just didn’t.

I’m not trying to get sympathy here, I had other family around to let me know that I was important and loved. And I was able to develop a special closeness with my father. Yes, he had ‘done her wrong’, but he wasn’t ready for marriage when it happened, and I don’t think he really was for many years. But, without the love and support of the rest of my family, my life might have been different…a lot different.

Yes, we worked through it. And, we forgave one another. We had both failed the relationship, we were both at fault. And forgiveness, when given, is one of the most powerful things in the world.

I spent so much time with her those last few years, where the in my life before, it was hard for me to be with her for more than a day or two. We would just be at each other’s throat, me defending myself, her pointing out things I was doing wrong. That had been our pattern. All that changed, when we were working through our issues; we would be yelling at one another, crying through our anger…then when we got it all out, we would look at one another and say, “Wow that felt good!”

How many chances do we get to really come to know someone we have had in our lives since the beginning, who we can’t seem to ‘get through to’ and be close to? Those last few years of my mother’s life were some of the best years of my life. It changed me. I learned patience, understanding, and most importantly, I learned how to forgive. She was in her late 70s, and I was in my 50s…about damn time!