One of the first modeling memories I can remember is trying to stand still and smile “pretty”. The lights were so hot, it felt like I was on a beach in the middle of a sweltering summer. I was trying not to sweat, trying not to scratch itches (sweating makes me itch), and trying to make my smile genuine. And, of course, sweating opens your pores, and you get zits, another No-No for models. Not a fun job. But the pay was nice.

This was one of my first modeling jobs, back when I was 12 years old. I was supposed to look like a teenager, dressed for school in what we called Bermuda shorts. It was Spring, 1957, and I would be 13 that following December.

How did I get there? Remember, in my past couple of blogs, that I was doing a radio show that coordinated with Dick Clark’s American Bandstand. I was in NYC, he was in Philadelphia. And there was the change going on with the company that owned the station that my show was being broadcast on. When I was a radio quiz kid, a lot of photos were taken, and it was discovered that I was very photogenic. Over the next few years, we found that I could look like many of the famous movie stars such as Zsa Zsa Gabor, Eva Gabor (see Cutex ad below), Angie Dickinson, and Doris Day. For ad agencies and their clients, this was a huge plus. It grabbed quicker attention in print ads if the person in the ad looked like a movie star, and was recognizable and loved. This was one of the main reasons why I was able to get so many modeling jobs, because I was far from a famous model like Suzy Parker. 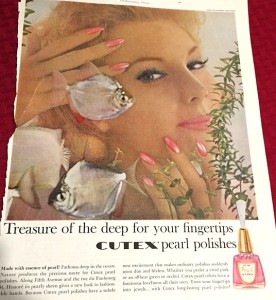 For some ads where they needed several gals, I would be paired with models such as Carol Lynley (who later became an actress). I had a crush on her brother Danny, who was adorable. All right, I was a mature 14 year old at that time. She would give me many tips to help my complexion, such as sticking my full face in a sink full of melting ice cubes (which closed my pores) before applying makeup. And how about putting petroleum jelly on my lips to keep my lipstick fresh, glossy and from staining my teeth. These tips still can work today, if you want to try them.

Life can sometimes be a bit strange. When I was so young, I looked older. Then, when I was older, I still looked young. Just lucky, I guess. For instance, this shows photos taken when I was a teen, then in my 40s, and about 50 or so, but still looking fairly young.

I had been signed by a fairly small modeling agency, Mil-Dor out of Chicago, because one of their models was from the same town I lived in, and they grabbed me quickly. I enjoyed my association with these managers, and did very well. I did agency work with L’Oreal, Revlon, Golden Goddess Salad Dressing, Ivory Soap and Ivory Snow, and many more. I have a photo (shown on the right) where I was in Paris for a shoot where they wanted me to look like Angie Dickinson.

We are in the Louvre in front of a beautiful stained glass window, and I am wearing a timeless Nina Ricci outfit that was taffeta, very heavy and I was very warm. But this shows you one of the many looks I could achieve.

And how about this one below? This is me, and I looked just like Doris Day. This was the photo that she saw and wanted me to be the exclusive model for her planned line of fashion based on her Pillow Talk movie and others she was doing in those days. We held off signing a contract, because she wanted me to “lose the big butt”. But, when I did lose a few pounds and my butt was smaller, so were my cheeks, and suddenly I had cheekbones and didn’t look as much like her. Go figure. And she blamed me! Wasn’t meant to be.

I was in very good company, some of the most beautiful women in the world were famous models. Nena von Schlebrugge was a Swedish model during the 1950s who also did some acting. She was Uma Thurman’s mother. Mary Jane Russell was an American model who worked throughout the 50s and 60s. She was featured on many Vogue and Harpers Bazaar covers and was often photographed by Louise Dahl-Wolfe and Irving Penn.

Lisa Fonssagrives was a Swedish model who married photographers Ferdinand Fonssagrives and Irving Penn. She was a top model both in Europe and America and she appeared on magazine covers throughout the 30s, 40s and 1950s. Dorian Leigh was the older sister of Suzy Parker, and despite only being 5’5″ tall like me, was one of the first supermodels.  Her full name was Dorian Leigh Parker. Anne St. Marie had the perfect elegant look required for 1950s and was married to Vogue and Harpers Bazaar photographer Tom Palumbo.

Famous for her beauty spot and remote aloof style, Jean Patchett modeled throughout the late 40s, 50s and 60s appearing on over 40 magazine covers. And Dovima, born Dorothy Virginia Margaret Juba (the name Dovima is a combination of all of those names), she was spotted by a New York street by the editor of Vogue.  She was allegedly the most highly paid model of the 1950s and was in demand for her aristocratic sophisticated style. And there is Carmen Dell’Orefice who enjoyed a modeling career in the 1950s and is still modeling today. She is known for being the world’s oldest fashion model aged 82 (and she still looks amazing!)

And, of course, Suzy Parker was one of the very top models of the 1950s and is perhaps most famous for being the face of Revlon. She was the first model to earn $100,000 per year.  Suzy was one of L’Oreal’s favorite models, “L’Oreal’s Top 5”, as shown in this photo, with an artist’s rendition of each of us. Suzy is on the left, Maud Adams (a James Bond gal) is in the middle, and I am middle on the right. 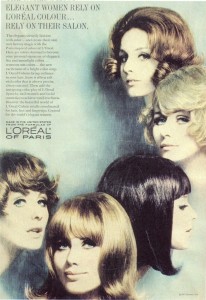 Did I want to be famous? Not especially. During those years, none of my friends or school mates knew what I was doing on weekends and holidays as well as part of the summers. I would just say that I was visiting relatives. They also didn’t know about my radio show in NYC, which was hours away from the town I lived in. You see, I wanted to have as normal a life as possible. I remember once, walking into ‘study hall’, and some girls were clustered together looking at a magazine. The page was open to an ad starring guess who? Me. And they were commenting on how they wish that was them, full of admiration, with absolutely no idea that the model was standing looking over their shoulder. Someone they actually knew.

In my mind, yes, models were very talented at what they did. But I didn’t want to be known for how I looked. I had a restless, intelligent mind, and wanted to do more. So, as I was preparing to graduate from high school, I decided I would leave modeling and head to college.

Stay tuned for my next blog, THE REAL MAD MEN. This blog will be based on the ad agencies and the agency people I met while modeling as well as the internships I had with two of the world’s largest agencies.